THE CASE FOR FAITH.
Soul bytes
By The Rev. Nigel Mumford+
Some people struggle with the issue of faith.
We hope in faith in unseen witness.
Is it “faith healing” or is our faith in God to heal?
Hopefully the latter.
Is the onus (responsibility) for faith in God’s healing on the supplicant (the sick person) or on the prayer team?
The supplicant may have a perfect faith or no faith at all.
Supplicants may not be able to pray because: 1) they don’t know how; 2) they are too sick or in a coma! 3) they are not “there” in their own faith walk.
Then the prayer team needs to “take on” the faith for the supplicant. We never say to a sick person, “If you had enough faith, get up and walk.”
That is religious abuse! Sadly, I have met supplicants who have been on the receiving end of such abusive theology.
Three examples of the faith of individuals leap from the pages of the Bible for me:
First is the faith of the four friends of the paralytic who had so much faith, they ripped open a roof to get him to Jesus.
Jesus then looked at the lads who did this saying,”By your faith your friend is healed.” Their paralyzed friend got up in
full view of everyone and walked — cured!
Second is the faith of the woman who had been bleeding for twelve years. She personally had so much faith, she pushed
through the crowd to touch Jesus’ robe. She was cured!
Third is the faith of the centurion, a Roman soldier in charge of a hundred men. His servant was sick. He asked Jesus
to heal him right there and then. He had the faith to believe that Jesus didn’t have to go see the servant. He just believed.
We know the outcome. His servant was healed that very hour!
Being a former “half-centurion” myself, in charge of fifty Royal Marine recruits as a drill instructor, I can really relate to his testimony.
May I underline that even if the supplicant has no faith, God can do whatever He likes, especially through the faith of the prayer team!
BIBLICAL REINFORCEMENTS:
Mark 2:5-11,12 NIV
When Jesus saw their faith, he said to the paralyzed man, “Son, your sins are forgiven.” So he said to the man,
“I tell you, get up, take your mat and go home.” He got up, took his mat and walked out in full view of them all.
Mark 5:25-29 The Message
A woman who had suffered a condition of hemorrhaging for twelve years — a long succession of physicians had treated her,
and treated her badly, taking all her money and leaving her worse off than before — had heard about Jesus.
She slipped in from behind and touched his robe. She was thinking to herself, “If I can put a finger on his robe, I can get well.”
The moment she did it, the flow of blood dried up. She could feel the change and knew her plague was over and done with.
Matthew 8:8 NIV
The centurion replied, “Lord, I do not deserve to have you come under my roof. But just say the word and my servant shall be healed.”
Matthew 8:13 NIV
Then Jesus said to the centurion, “Go! Let it be done just as you believed it would.” And his servant was healed at that very moment.
THE BOTTOM LINE:
Hebrews 11:1 NIV
Now faith is confidence in what we hope for and assurance about what we do not see.
THE TAKE-AWAY:
See 1 Cor 12:9 NIV
I encourage you to pray for the gift of faith.
Be well,
Do good works
And for the sake of God
Love one another.
Fr. Nigel Mumford+
www.byhiswoundsministry.org

Dr. Henderson called me this afternoon. He let me know he is a very busy Washington, D.C. neurosurgeon. I met him in Washington at two healing missions which I led. I anointed his hands so his patients might be cured by God. He told me point blank, he doesn’t waste his time on silliness.

Last October at a healing conference, I prayed with him for two of his patients, a teenager and his brother. He brought the teenager who had very serious neurological issues. He told me she had an occlusion (blockage) of both carotid arteries. He bluntly told me that she should have been in the ICU on a ventilator with post-sustained deficiencies, or dead! He told me that he had done research on this and only one dozen recorded incidents in the world have ever happened.
Now, she has very good brain profusion. She is a walking miracle!

“There is more. . .” he said, “My brother, (name given) felt extreme heat on his spine for 4 hours after prayer for the metastatic prostate cancer. He had tests two weeks ago. . .there is nothing left of the cancer in his body!
My brother has been totally cured of prostate cancer!”

His parting comment:
“You cannot see this and not have your life changed.”

I need to tell you, he called me. I did not look for this. . .this is what you will see and hear after you pray with people.
We don’t do this to hear the outcome. . . but when God lets you know the outcome, then OUR FAITH IS RAISED !

Dr. Henderson has given me permission to publish this article.

TESTIMONY
By Linda Brill
Feb 2014
I am going to share! Six yrs ago (2008) I was destined to a wheelchair. No cure, no operation. I was forced and led to a healing service (which I knew nothing of and didn’t believe in) after I was on the floor for over 15 min with no feeling from waist down. I told God then, its OK, let’s go, you have a different plan for me, its OK. I got feeling back immediately, LOL! Went to this healing service led by Fr. Nigel! To this day, I dance for the Lord, do liturgy and allow the Holy Spirit to flow and prayerfully touch many. There is no more wheelchair. Healing ministry has become my middle name. I praise, humble myself and am overwhelmed the way the Lord works and He is the same yesterday, today and tomorrow! I thank God every day for the blessing, anointing and gift He gave to us in His son, Fr. Nigel. We are all healed daily in many different ways, sometimes in ways we don’t recognize or see. Believe without an inch of unbelief, you only need a mustard seed! Pray for Fr. Nigel daily in the mighty ways the Holy Spirit empowers and works through him. May our Lord always be smiling and glorified!!!! May He ALWAYS anoint and protect Fr. Nigel. Amen & Amen!
Linda Brill.
Linda has given me permission to re–post her testimony. To God be the Glory…
NM+

Thoughts and Reflections on Convalescence
Fr. Nigel Mumford+
Oh God, it is my desire to read the hearts of people coming for prayer.
After surgery there is a time of convalescing. . . a time to get your body, mind, and spirit back together.
It’s a Humpty-Dumpty time, if you will. It’s a time to reflect, when you can, but also a time to press through the pain, the discomfort, and the side-effects of medications.
Nausea, dizziness, the sweats, and thoroughly nasty feelings of being totally out-of-whack — convalescing is a time to slowly move back-into-whack. You know that each movement will produce pain, anticipate that pain, thank God for the pain, and then, press through the pain. Slowly, day by day everything gets better, but sometimes having a full day of set-backs is all totally normal. Slowly, the days get better. Slowly, there is less pain.
Now, there comes a fulcrum point, a balance point, a moment of revelation when you know that the Lord is at work. This moment is a shift of thought, moving from the flesh, the physical and emotional issues of dis-ease, into the spiritual side of the healing process. Oh, what a feeling!
We move into a new season: a time of reflection, a time to think about God and His mysteries, a time to meet head-on the threshold of physical and emotional pain, and even the threshold of spiritual pain. It is as if we are being introduced to the pain of Good Friday, a minute glance of what the Lord suffered for us.
To be able to “bump” into the wall of the unknown, without fear is a real but tough blessing.
How did You, Jesus, endure it?
What did happen to all those people whom Jesus healed, anyway?
What did they do after they “bumped” into Jesus?
How did they conduct their lives, having had a glimpse of heaven?
How do you bring your heart into a new alignment with God after trauma and sickness?
Would you let God read your heart?
Can you let what is written here sink into your heart?
Lord, I desire to read people’s hearts so they may be healed.
Please read mine.
Be well, do good works, and for the sake of God, love one another.
Fr. Nigel Mumford+ 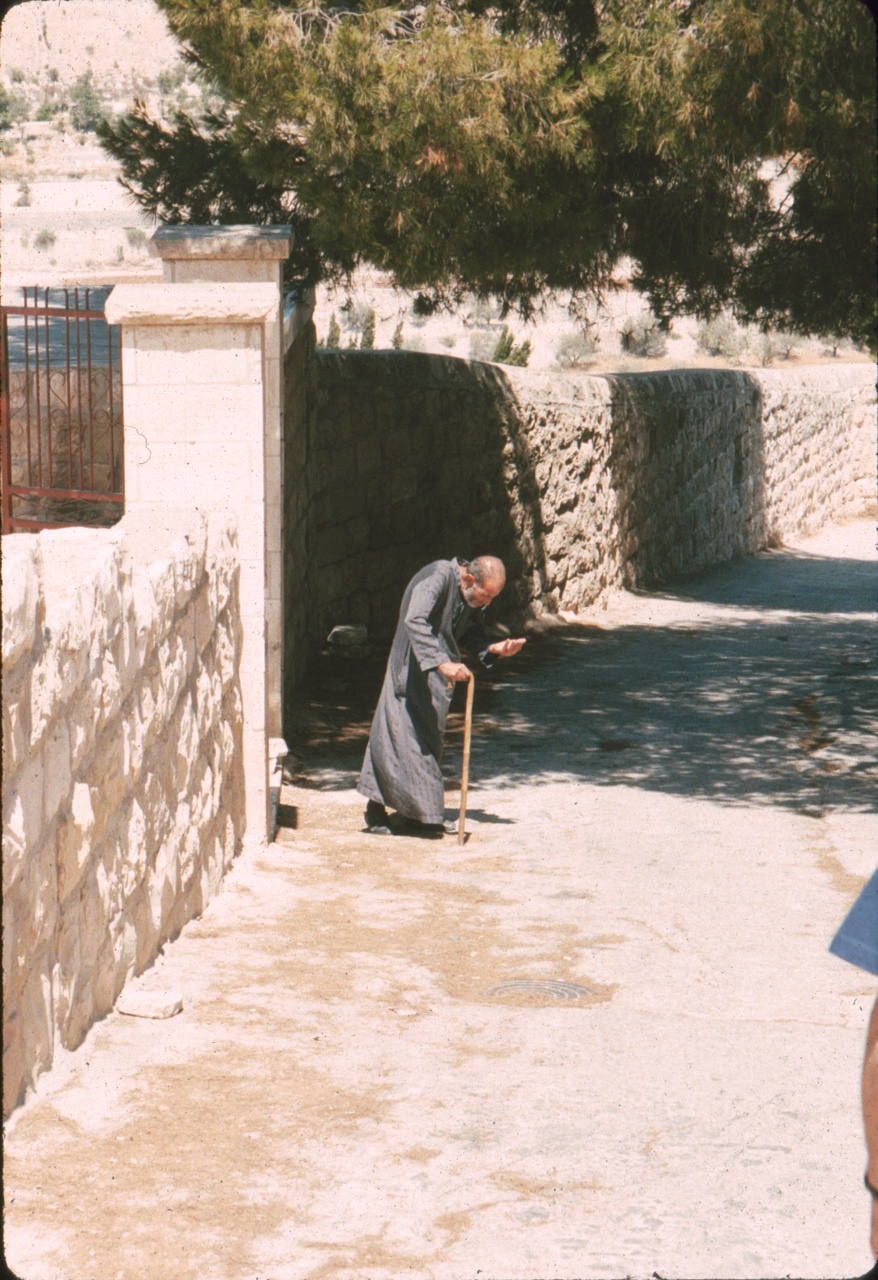 I took this photo in Jerusalem in 1998
I felt that I had been taken back in time about 2,000 years.
The Beggar…
I have been sitting at this same spot
For years.
It is my spot, everyone knows it.
I have my routine.
This is my domain.
I have survived but
I have not thrived
There have been lean days
Then sometimes a generous person
Comes along, to make my day.
People generally are kind
But sadly, some are just nasty to me.
I have taken a couple of kicks …
This one time
It was so unexpected
These two chaps
They came to me, so intent.
They definitely had something on their mind.
I am not really sure I understood what he said,
“Silver and gold have I none”
That’s all I need pal, nothing else!
Silver and gold will get me out of being a beggar!
He grabbed me by the hand
He pulled my up
He mentioned a man I had heard of
Jesus the Christ…
I tottered
I WALKED…
What?
I CAN WALK.
What happened?
All I know is, I can walk.
I haven’t walked in years
THANKS BE TO GOD.
I didn’t get a hand out
I got a hand up…
How do you know Jesus anyway?
Thanks do much gentlemen.
Thank you Jesus.
Now what do I do?
Fr.Nigel Mumford+
© Copyright:  Nigel W.D. Mumford 2013 All rights reserved.